In Nepal, child trafficking is a national crisis. Children are being purchased from poor parents for as little as $15, and sold to children’s homes in Kathmandu. Parents are persuaded that their children will have a  better life in, and sell them in hopes of a bright future. 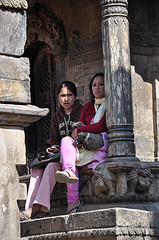 According to an article at RT.com, there are, “around 15,000 children living in orphanages in Kathmandu.” At least 500 orphanages exist in the area, and only eleven  are regulated by the government. Conditions in the orphanages are treacherous, with care givers rationing food, and beating children.

So what makes these children so valuable a commodity, that they’re being rounded up by the thousands?

The need/demand for adoptable children in the West is causing this human tragedy. A family abroad in willing to pay $25,000 for one child. Therefore, children who already have parents are being purchased, and forced to live in slum orphanages.

To make matters worse, the Nepalese government currently “has a freeze on child adoption to Western countries due to rampant cases of abuse, fake documents and false statements.”  So the children are no longer with their biological parents, and have no hope of being adopted by the rich Western family their parents were promised.

Horrible, deplorable, despicable… all  of these words understate my outrage.  I am not faulting Western families for wanting children, but I wonder how this demand for babies is playing out in other countries.  Surely, Nepal is not the only country where crooks recognize the opportunity to make money from selling kids to the West.

Adoption must become a centralized process, with an international group overseeing it. Of course, we don’t even have a centralized system for adoption in America, (every state has its own rules &  baby brokers still exist) so standards, legislation, and protective processes for worldwide adoptions are as likely as Bigfoot knocking at my front door!

When a North American or European family dolls out $25,000 to adopt a child internationally, what is the human cost?